The beautiful island of Santorini in Greece

Quick Access hide
Before you die, you must visit Santorini, a Greek island
Here are some of the most stunning villages on Santorini, in all their whitewashed Cycladic glory:

Before you die, you must visit Santorini, a Greek island

The beautiful island of Santorini in Greece is perhaps the most well-known of the Greek islands, with its whitewashed, cube-shaped structures with blue accents, steep cliffs, and tangerine sunsets that light up the sky and sea. Whether you arrive by ferry (high-speed and slow choices are both available) or plane, you’ll find unusual red and black sand beaches, top-notch local vineyards, and superb tavernas serving fresh seafood and fava. The Cycladic island, which was an island formed by the biggest volcanic explosion in human history, is a postcard come to life. Among the most stunning villages on Santorini, Oia is undoubtedly Santorini’s most picturesque hamlet. It has the best site in Santorini to watch the sun set over the famed volcanic crater.

The beautiful island of Santorini in Greece has been a victim of Mother Nature’s ruthless cruelty as well as a piece of art. The Cycladic island, which was an island formed by the biggest volcanic explosion in human history and the best site in Santorini, is a postcard come to life. Its lunar vistas and deeper-than-blue seas appear to have fallen from the sky, and the views are almost mystical. Then there’s the architecture, which is an incredible display of human skill and craftsmanship. Whether it’s a cascade of pastel-hued buildings drenched in the glory of sunset, the omnipresent dreamy cobblestone courtyard covered in bougainvillea, or a tranquil alleyway lined with cubic sun-bleached homes carved into the rock face, every twist and turn here is a photo shoot opportunity. Among the most stunning villages on Santorini, Oia is undoubtedly Santorini’s most picturesque hamlet. The beautiful island of Santorini in Greece is overwhelming.

Check out the Trips News on the JourneyBlog.ca : History of pasta in Italy

Here are some of the most stunning villages on Santorini, in all their whitewashed Cycladic glory: 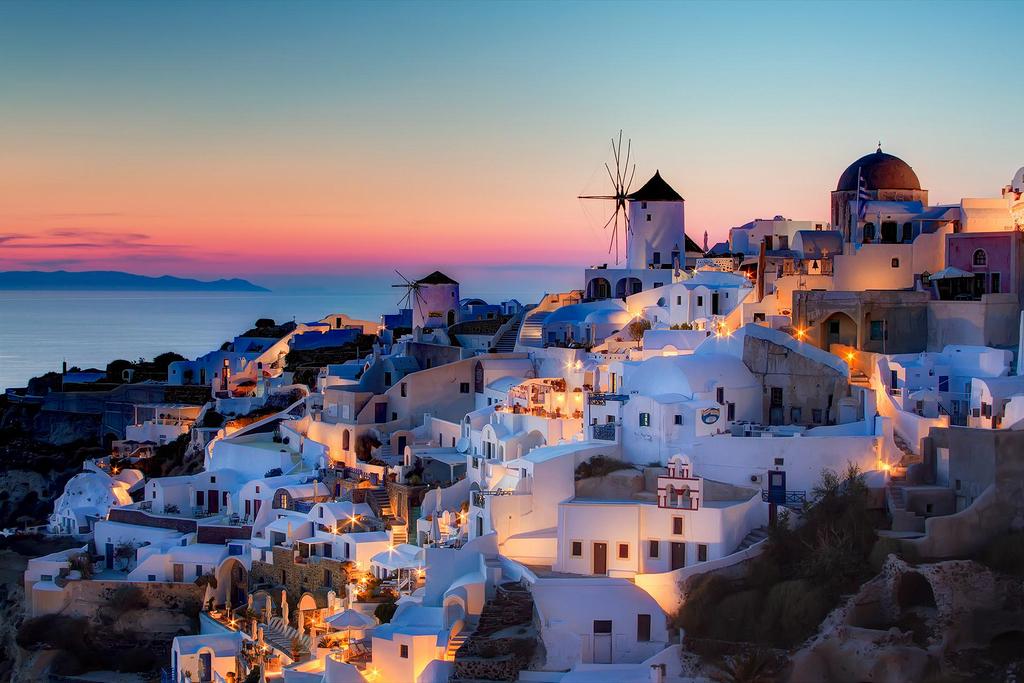 Emporio is a little stone-built village nestled in the foothills of Mount Prophet Elias, 12 kilometers south of Fira, with narrow, meandering lanes leading up to a fortified Venetian castle. The medieval terrain is dotted with Cycladic blue-domed churches and beautiful courtyards, and 8 old, abandoned windmills protect the calm village from the ridge of the surrounding Gavrilos hill. Though the largest settlement on the island, Emporio has managed to keep its traditional charm.

Megalochori is a picturesque town in Santorini that is difficult to beat. Along stone-cobbled pathways, stately neoclassical mansions, time-honored wine canavas, and traditional white Cycladic houses compete for space, yet its location on a hill further inland keeps it blissfully off the tourist road.

If you click on this link, you will redirect to:
FoodMag.ca
Check out the Cooking Tips on the FoodMag.ca : What is the ingredient of Japanese cheesecake?

Imerovigli, perched on the caldera’s rim at the highest point, is undoubtedly the best site in Santorini to watch the sun set over the famed volcanic crater. It is lauded for its spectacular Aegean vistas, hypnotic sunsets, and beautiful abodes built into the cliff face, yet it is more quieter and more easygoing than Oia. Beautiful sea-view churches, dramatic hotels with typical cave rooms, and a handful of gourmet restaurants can be found in the village, which is conveniently positioned approximately 2 kilometers from the island’s capital, Fira.

It’s a joy to walk Pyrgos’ small winding lanes, which are lined with traditional whitewashed homes, remnants of neoclassical mansions, and stunning blue-domed churches. The settlement is wrapped amphitheatrically around a hill crowned by the well-preserved remnants of a Venetian castle. It is subdued, authentic, and refreshingly devoid of visitors. Its advantageous location on one of Santorini’s highest points offers breathtaking panoramic views of the entire island, all the way to pastel-tinted Oia.

Related tags : an island formed by the biggest volcanic explosionSantorini's most picturesque hamletThe beautiful island of Santorini in Greecethe best site in Santorinithe most stunning villages on Santorini