While water shortage is a severe problem that affects more than 748 million people worldwide, Sub-Saharan Africa has been hit the worst. Besides water shortage in Africa, due to political instability, ethnic conflicts, and a general lack of essential resources such as safe, clean, and adequately sterilized water, poverty has become pandemic in areas of Africa. A decline in fresh water in Africa has also been attributed to an increase in pollution and the erosion of river catchments. Understanding how and why Africa’s water issue arose is critical to enlisting additional support for the cause. Let’s read some facts about water in Africa.

Quick Access hide
7 Facts about Africa’s Water Crisis
40% of Sub-Saharan lacks access to safe drinking water in Africa.
In 1997, over half of Africa’s population was affected by a water-related disease.
Water pollution is frequently caused by mining disasters.
In 14 African countries, there is a shortage of water.
Surface water is used by two-thirds of Sub-Saharan Africa.
Families are forced to travel to obtain water.
Six hundred and seventy-seven lakes may be found in Africa.

Here are some fascinating facts regarding Africa’s water crisis, as well as how you can help and make a difference in the lives of millions of men, women, and children in Liberia. Some facts about water in Africa are as follow:

40% of Sub-Saharan lacks access to safe drinking water in Africa.

North Africa has made significant progress in providing safe, clean water to its people. North Africa already has 92 percent coverage, and this percentage is increasing. Sub-Saharan Africa, on the other hand, has just 61 percent coverage and is improving slowly. This implies that 40 percent of Sub-Saharan Africa’s 783 million inhabitants do not have access to clean drinking water. Water shortage in Africa is so serious.

In 1997, over half of Africa’s population was affected by a water-related disease.

Waterborne illnesses are caused by a variety of pathogens transmitted by the use or consumption of contaminated water. Pathogens, as well as climate change, floods, and high precipitation, can all have an impact on water quality. Cholera, amebic dysentery, typhoid, and hepatitis A are some of the most frequent aquatic infections. In 1997, over half of Africa’s population was affected by at least one severe water-related ailment, and many people in the area are still suffering from the consequences of dirty water in Africa.

While there are numerous causes of polluted water in Africa, mining disasters are one of the most significant contributors. In 1994, a bulk freighter collapsed off the coast of Cape Town, spewing 2,400 tons of oil. A tailings dam at Merriespruit broke in the same year, causing 600,000 cubic meters of hazardous fluid to blanket areas of town. The tailing dams of a mining company in South Africa broke in 2014, creating massive contamination in the Kruger National Park’s waterways. Numerous sicknesses and fatalities came from these sorts of mining mishaps.

In 14 African countries, there is a shortage of water.

Water stress occurs when a region’s water supplies are insufficient to meet the demands of that area. Water stress can be caused by a variety of factors, including climate change and changing weather patterns. There are fourteen nations in Africa that are now experiencing water scarcity. Another 11 nations are anticipated to face water stress in the future years if nothing is done to avert increased water shortages. Understanding how and why Africa’s water issue arose is so critical. 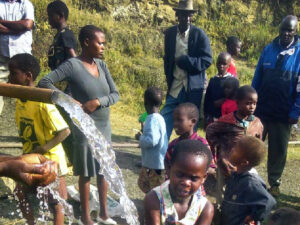 Surface water is used by two-thirds of Sub-Saharan Africa.

Surface water is water that is found on the planet’s surface, such as lakes, rivers, wetlands, and ocean water. Surface water is not regarded a dependable and safe source of drinking water due to the presence of numerous contaminants. Surface water, in fact, should never be drank without first being filtered and sterilized. Unfortunately, surface water is used by two-thirds of the people in Sub-Saharan Africa for drinking and other reasons.

Families are forced to travel to obtain water.

Families in Africa are unable to obtain fresh water by turning on a tap in their kitchen. Instead, people must drive long distances to obtain water and transport it to their home. A bucket of water can weigh up to 40 pounds or more, hence this is usually the task of the family’s female member. Most African women are compelled to make this journey at least once a day. Despite their efforts to have clean water at home, the water they transport back and forth is still unfit to drink.

Six hundred and seventy-seven lakes may be found in Africa.

Due of Africa’s water crisis, you may believe that the continent has limited access to water in general. This, however, is not the case. In reality, Africa has the most lakes, with 677, making it the continent with the most non-frozen water. Understanding how and why Africa’s water issue arose is critical. The issue isn’t a shortage of water; it’s a lack of safe drinking water.