The Blue Lagoon is considered to be one of Iceland’s most famous tourist attractions. The stunning milky-blue lake stands out against the surrounding black lava fields and creeping grey moss like nothing else on the planet. The water is consistently 39°C (102°F) all year, making it ideal for bathing.

The lagoon is located on Iceland’s Reykjanes Peninsula, which is known for its desolate landscapes and cone-shaped volcanoes.

It is only a 15-minute drive from Keflavik International Airport and a 30-minute drive from Reykjavik, Iceland’s capital city. As a result, it’s a great place to visit either as your first stop in Iceland or as your last one before departing. The Blue Lagoon swiftly became Iceland’s most visited destination, second only to the Golden Circle tourist route, due to its superb location, calming waters, and rich skin nourishment. It is known for one of Iceland’s most famous tourist attractions and Iceland’s most visited destination.

Check out the Trips News on the JourneyBlog.ca : What are top places and attraction to Visit in Finland 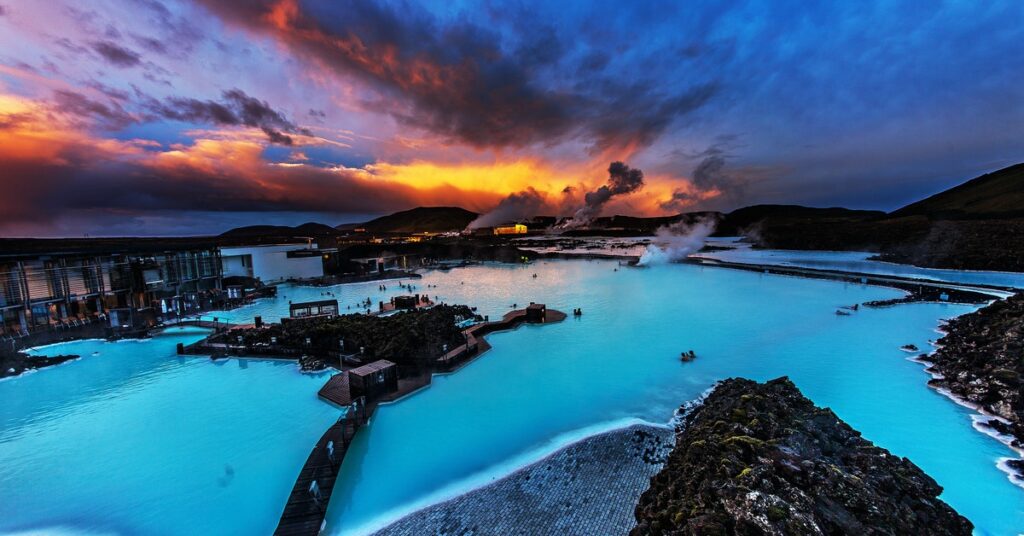 The Blue Lagoon in a Nutshell

If you don’t have time to read the entire essay, here are the most important items to remember about the Blue Lagoon.

Is the Blue Lagoon a natural occurrence?

The history of the Blue Lagoon, a geothermal spa in southwestern Iceland, dates back to 1976, when it formed near to the Svartsengi geothermal power station. The lagoon is not a natural hot spring, as many people believe, but rather a pool created by a man-made building. It’s actually waste water from a power plant drilling for steam and hot water. But don’t worry; the water is fully safe and free of hazardous chemicals, containing only natural minerals that have been shown to be beneficial to people’s skin. Because water is constantly flowing into the lagoon, it is completely refreshed every 48 hours, ensuring that it remains clean. It is one of Iceland’s most famous tourist attractions and Iceland’s most visited destination, second only to the Golden Circle tourist route.

How did the Blue Lagoon come to be?

The Svartsengi geothermal plant was built in 1971 and put into service in 1976. Iceland has a lengthy history of using its geothermal resources. It’s been used to heat houses and cook, such as burying bread to bake it. Boiling hot water is pumped directly from the ground into the radiators of Iceland’s homes for heating. For this reason, the Svartsengi plant drills for hot water, which it obtains at a temperature of roughly 200°C (392°F).

The best museumsIf you click on this link, you will redirect to:
FoodMag.ca
Check out the Cooking Tips on the FoodMag.ca : Recipe of walnut tart

However, because this water contains dissolved minerals that are mixed up with seawater, it is not ideal for direct use to heat homes (the minerals would damage the pipes). Instead, the water is used to heat freshwater, which is then pumped to adjacent cities. The water is then simply discharged into a nearby lava area. The lava field that surrounds the geothermal plant is known as Illahraun and is thought to have formed as a result of a volcanic eruption in 1226.

Because lava is permeable, water normally sinks into it and vanishes. This water, on the other hand, is high in silica, which separates as it cools. The silica in the lava immediately produced a mud layer, which blocked the water from seeping through, forming the lagoon.It is one of Iceland’s most famous tourist attractions and Iceland’s most visited destination, second only to the Golden Circle tourist route.